“Come Holy Spirit”: A Story from the UK 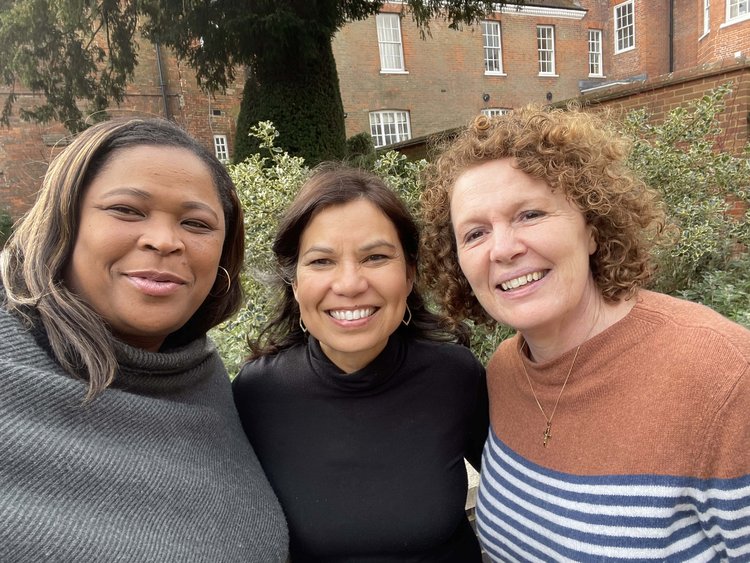 Allegra, Shana, and Michaela from the Parish of St. Peter and the Winchester Martyrs. (Submitted)

A few months ago, these three parishioners didn’t even know each other — now, they share their lives and grow together in faith.

“Let us not grow tired of praying. Jesus taught us to ‘pray always without becoming weary’ ( Lk 18:1). We need to pray because we need God.”

During this month’s What is God Saying to the Church? online event, Bishop Barron stated: “Prayer is not just pious wishful thinking, prayer accomplishes something, and so we pray very intentionally, purposefully.”

Once a week in the Parish of St. Peter and the Winchester Martyrs (SPWM) in the UK, Shana McDonough, Michaela Waterfield, and Allegra Mutanda do just that: they meet and they pray.

A few months ago, they didn’t even know one another. Now, they share their lives and grow together in faith as they pray with the leading of the Holy Spirit.

Allegra, who is the Director of Evangelization and Leadership at the parish, facilitates this group (as well as the Parish’s Alpha). It all started at the Holy Spirit retreat day during the parish’s fall Alpha. 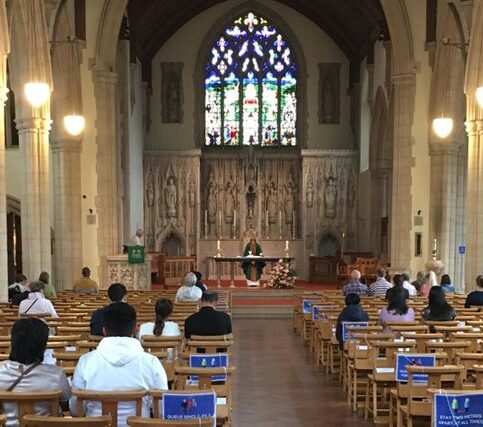 Shana is an American military spouse who has grown accustomed to a life of transition, moving every three years to wherever her husband is posted. Shana grew up as a Buddhist but states, “I was always searching for something, but I didn’t know what it was.” Her husband was stationed in Italy shortly after they had their first child. They were surrounded by Catholics and soon she was invited to the Rite of Christian Initiation of Adults (RCIA) by friends: “I liked the tradition…your whole life you are connected to God.” She wanted her daughter to “have something to ground herself in”. However, she still kept one foot in Buddhism until a pilgrimage to Medjugorje brought about a personal re-conversion experience. Since then she has been steadfast in her faith.

When asked to participate in Alpha “I felt that it wasn’t for me because I already felt my faith was really strong.” But after her 19 year old son expressed interest and Allegra mentioned it would be a great way to volunteer to get connected in the parish, she joined. “I love any opportunity to talk about God.”

Shana has a habit of beginning the day with this simple prayer: “Holy Spirit what is on your heart?” In the fall she felt the date ‘Nov.13th’ impressed on her and circled it on the calendar. Later, she would discover that that was the scheduled Alpha retreat day. She was expectant of what God was going to do…

Michaela has been a primary school teacher and RE Coordinator for most of her career, but has recently moved into a role on staff at the parish. Michaela was born and raised in the Church and has spent most of her life in the Winchester area. When Alpha started up in SPWM she assumed it was catechesis and was surprised when she was invited to join. She recalls, “I didn’t think I needed to join the Alpha course as I already had knowledge and a real experience of the faith through my Catholic upbringing and time teaching in a Catholic school”.” A deacon suggested it would be worth attending so she could let newcomers know what it was like, so she joined.

Lockdown had been particularly hard on her; her father’s health was poor, and she was in a dark place and struggling in her faith.

Within a few weeks of attending Alpha, the friendships, discussions, “the whole process of having a meal together, getting to know people” was something Michaela looked forward to. Entering the Holy Spirit retreat day she expected the same would be true…

In some ways it was. During the retreat day “you just really felt like you were being treasured and taken care of” Michaela says. The group experienced a morning of laughter, good food and friendship. In the afternoon they moved into prayer. “That was a total game changer” says Michaela.

As Allegra led the prayer time, she encouraged everyone to be open to receive and reminded them of God’s promise to give the Holy Spirit to those who ask Him. “As a practicing Catholic I’ve never witnessed something so powerful,” Michaela continues, “I’m not the most confident of people so I wasn’t praying aloud.”

During the prayer session, Shana was praying for those around her to experience the Holy Spirit. When she had had her reconversion, she had prayed for God to “use me even if I look ridiculous.” However she does note, “I am a very quiet person…I don’t like to be the centre of attention.” But, as the group was singing and praying “I let out a wailing…my whole body was shaking, my hands were shaking and then I started speaking in tongues very loudly in front of all these people.” Afterwards she felt like she had put her finger in “an electric socket.” A completely new experience for her and one that left her wanting to go touch base with her son so that he didn’t feel “his mom had just gone crazy.”

As Michaela saw Shana and other people praying and experiencing the Holy Spirit, the darkness she experienced in the lockdown came swirling back – she felt left out, and filled with sorrow. Sandwiched between Father Anthony and an Alpha leader, she began to think that there was nothing for her. She asked Father Anthony for prayer and as he

prayed a beautiful prayer for courage over her, she began to cry.  This was something they had discussed before, but still she did not feel she had received it.

After the prayer time, Michaela spoke with Shana about her experience, and she still felt forgotten. She recalls, it felt as if Shana “got the golden ticket from Charlie and the Chocolate factory…I really wanted what I heard other people receiving.”

Shana went home and shared the experience of the Holy Spirit with her husband but otherwise kept it to herself.

Allegra notes that along with extensive training of the Alpha leaders beforehand, she also imparts after the prayer session “whether you have felt something or not does not negate the action of God. We have prayed for the Holy Spirit to come and the Holy Spirit has come – we need to believe that. And continue to say those prayers; tonight, tomorrow, in the next days, ‘Come Holy Spirit’ ” So, Michaela trusted Allegra and the leadership of Father Mark and Father Anthony and knew it was something real – whether or not she felt it.

But Michaela wondered “why not her?” So as she drove home in the rain and dark she prayed again: “I’m going to give it another go but I’m going to pray out loud with all my heart”. Her tears returned and she got “the most intense goosebumps” from her toes to her head as she was praying and crying “and I just started praying in tongues.”

After the retreat day both Shana and Michaela wanted to learn more and Allegra suggested the three should meet on a weekly basis to pray and learn together. Michaela says, “It just feels that my faith had renewed, completely renewed.”

The prayer time has been essential for each of them. During the three months they have been praying together Michaela’s father has passed away. She states “it’s been a journey that I needed at this particular point in my life.” Every time they meet, Shana says “it is like the Holy Spirit give us a theme” to pray for.

At the end of January, Shana shared about Alpha at Sunday Mass (watch video at the 1:22:30 mark).

“As strong as I felt my faith was the Holy Spirit filled me up even more…I realized that our God is such an abundant giver. He gives above and beyond because he wants you to be closer to him. He is pursuing you, but he needs you to turn towards him.”

Father Anthony reflects, “the experience has brought a lot of change in the parish.” He feels there is a hunger for God and the excitement from that Alpha has extended over to the current Alpha cycle as well as the parish as a whole. Father Anthony relays that spouses who have never come to church are now attending, unchurched people are coming through the doors and “they just want to experience what others have shared.”

Ultimately, he states, “the glory is all God’s.”